To recover your password please fill in your email address

Please fill in below form to create an account with us

Acoustics and noise control play an important role in modern buildings. SAS is releasing the first part of five series on basic acoustic technical information. The series will consist of basic knowledge pertaining to sound. The information provided will serve as a basis for the determination, selection, and specification of products and systems, more suitable for noise and vibration control.

A sound is a mechanical wave that results from the back and forth vibration of the particles.  It is a physical alteration in a medium that can be detected by the human ear. All sounds are vibrations traveling through the air as sound waves. Sound waves are caused by the vibration of objects and radiate outward from their source in all directions.

Sound waves in the air are caused by variations in pressure. The vibrating body causes the medium (water, air, etc.) around it to vibrate. The variations of pressure originate in many ways, for example:

1.    By a pulsating air current, such as that produced by the blades of a spinning fan.

3.    By the flight of an airplane, which creates shock waves.

The generally accepted standard range of audible frequencies is 20 to 20,000 Hz, although the range of frequencies individuals hear is greatly influenced by environmental factors. Frequencies below 20 Hz are generally felt rather than heard. Frequencies above 20,000 Hz can sometimes be sensed by young people. High frequencies are the first to be affected by hearing loss due to age and/or prolonged exposure to very loud noises. 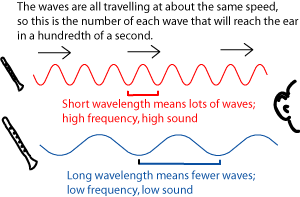 Diffraction describes the change in a wave’s direction as it travels between or around barriers. In diffraction, waves actually bend around objects that they encounter in their path or bend through openings in between two barriers.

Acoustic power is the rate at which energy is emitted, reflected, transmitted or received, per unit time. Sound power is expressed in watts. It is the power of the sound force on a surface of the medium of propagation of the sound wave. For a sound source, unlike sound pressure, sound power is neither room-dependent nor distance-dependent. 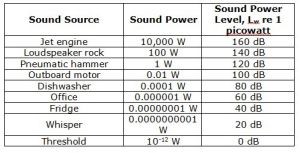 Solving sound issues can be a complex problem. Understanding the parts and pieces can go a long way to helping you find a solution for your sound or noise problem. Sound Acoustical Solutions can assist you with absorbing or isolating problematic sound issues. Explore our website to learn more about the solutions for curbing excessive noise.

In the study of sound, there are words that are used that by Architects, Engineers, Builders and Acoustical Consultants. The list below will help in...

Sound Part four: Part four of our technical notes will explain noise and the effects of noise pollution. You want your home to be an...